So, tonight at my parents’ house for dinner, where I go each Sunday with the kids, we got to talking about home remedies. It started because while I was in San Diego, my team and I sat around talking about what their parents would give them – for everything. One guy had cod liver oil, another had something else, to be honest, a lot of beer had been drunk that night, so I don’t remember it all. But I do remember the horrified looks when I told them about one of my grandmother’s remedies – one she gave to my mother and my aunts. For a sore throat, a spoonful of Vaseline with sugar on it was the norm.

I mentioned this to my mother, and she started telling me about other things, which then brought up the point that most drugs that are illegal today, weren’t until the 1930’s or thereabouts. She dug this up to point out some other things either she, her friends, or my grandmother had been given. Probably my great-grandmother, but we have no way of knowing – she left her husband and daughter (my Grammy) to run away with another man when my grandmother was a baby.

Anyway, I’m sure this isn’t the first time this is out there, and I wish I knew who to credit it to, but I got such a chuckle, I thought I’d share. Of course, this is also one way of stalling with the scene I’m writing, as it’s not going as smoothly as I’d hoped. And oddly enough, I have a story idea for some of this, but I doubt anything will come of it. One of those “sounded like a good idea at the time” sort of things.

WHY OUR GREAT-GRANDPARENTS WERE SOOO HAPPY
Why Our Great-Grandparents Have Such Fond Memories Of Their Youth…I’m surprised that they could remember anything!!

A bottle of Bayer’s ‘Heroin’

Between 1890 and 1910 heroin was sold as a non-addictive substitute for morphine. It was also used to treat children suffering with a strong cough.

Metcalf’s Coca Wine was one of a huge variety of wines with cocaine on the market. Everybody used to say that it would make you happy and it would also work as a medicinal treatment. 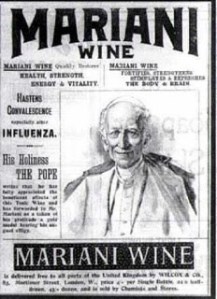 Mariani wine (1875) was the most famous Coca wine of it’s time. Pope Leo XIII used to carry one bottle with him all the time. He awarded Angelo Mariani (the producer) with a Vatican gold medal.

Produced by the Maltine Manufacturing Company of New York .
It was suggested that you should take a full glass with or after every meal. Children should only take half a glass. 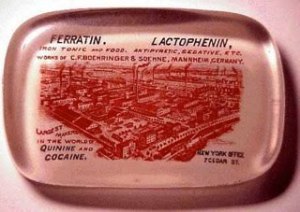 A paper weight promoting C.F. Boehringer & Soehne Mannheim , Germany. They were proud of being the biggest producers in the world of products containing Quinine and Cocaine.

At 40% alcohol plus 3 grams of opium per tablet, it didn’t cure you, but you didn’t care… 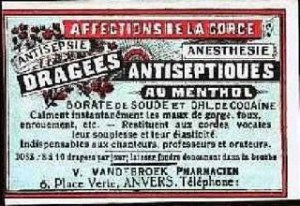 All stage actors, singers, teachers and preachers had to have them for a maximum performance. Great to ‘smooth’ the voice.

Very popular for children in 1885. Not only did they relieve the pain, they made the children very happy!

I’m sure this would make them sleep well (not only the Opium, but also 46% alcohol)!

It’s no wonder they were called, ‘The Good Old Days’!! From cradle to grave … Everyone Was Stoned!!!

One thought on “The Good Old Days”